Day 1 of the webinar also featured keynote presentations from:

Day 2 of the webinar featured agency updates from OPC, the State Water Resources Control Board, CalRecycle, and the NOAA Marine Debris Program. Day 2 also featured report outs from the day 1 breakout sessions, which were not recorded. Please see the webinar recordings and agenda for more information.

At its October 25, 2018 meeting, OPC approved a $1.68 million Proposition 1 grant to the City of Newport Beach for planning and implementation of the Newport Bay Water Wheel project. The staff recommendation is available here and links to the related exhibits are on the meeting agenda page (see meeting link above).

Modeled closely on the design of the highly successful Baltimore Trash Wheel project, the Newport Bay Water Wheel could immediately reduce trash load reductions of 50%-80% once installed, according to estimates by the City of Newport Beach. Follow Mr. Trash Wheel on Twitter to learn more. 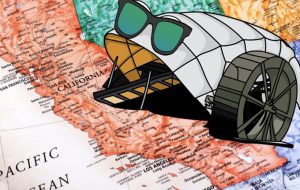 Please Note: A working group has been convened to continue discussion on topics raised at the August 20th meeting described below. To see the working group main webpage with current activities, click here.

On August 20, 2015 the Ocean Protection Council, CA Department of Fish and Wildlife, and NOAA Fisheries hosted a meeting focused on sharing information and exploring ways to reduce the risk of entanglements in the California Dungeness crab fishery. Commercial and recreational fishermen, environmental NGOs, and interested members of the public gathered to discuss this important issue. PDF versions of the slides shared at the meeting can be downloaded below.

END_OF_DOCUMENT_TOKEN_TO_BE_REPLACED

On September 30, 2014 California became the first state in the nation to enact a statewide ban on single-use plastic bags. In this precedential moment, Secretary for Natural Resources and Ocean Protection Council Chair John Laird applauds the legislature and Governor Jerry Brown for ushering in this ban. END_OF_DOCUMENT_TOKEN_TO_BE_REPLACED

Summary of Resolutions Passed at the August 27, 2014 OPC Meeting

On August 27, 2014, the California Ocean Protection Council passed two resolutions: one to support the State Water Resource Control Board’s adoption of a trash policy, and one to support implementation of the “Safeguarding California Plan for Reducing Climate Risk.” END_OF_DOCUMENT_TOKEN_TO_BE_REPLACED

Through a 2012 contract with the U.S. Environmental Protection Agency, Kier Associates quantified the cost spent by 90 cities, large and small, in California, Oregon and Washington located along the coast or in watersheds draining to the ocean, to clean up litter and prevent trash from entering the ocean or waterways leading to it. The study finds that these West Coast communities, regardless of their size, spend an annual average $13 per resident to control litter and reduce marine debris. Nearly fifty million people live in these three states and over 85 percent of them live on the ocean or along rivers leading to it. West Coast communities are, therefore, spending more than $520,000,000 a year to combat litter and prevent marine debris. This public cost burden makes a compelling argument for accelerating the search for effective strategies to reduce and prevent trash streams that enter our waterways and contribute to marine debris.

Beachgoers and wildlife need the same thing – clean ocean water. A relaxing day enjoying California’s waters can easily be undone by beach closures or widespread harmful algal blooms. With California’s coastal and ocean waters extending from the top of the watersheds to the deep waters off the coast, the Ocean Protection Council has made improving water quality a top priority.

Objectives of the Ocean and Coastal Water Quality Section of the 2006 – 2011 OPC strategic plan:

To reduce pollution, we must improve how California’s water quality laws are enforced. Several agencies have responsibility to keep our water clean but they may be hampered by funding or conflicting legislation. The OPC seeks to coordinate and support the agencies and their programs to enforce existing water quality laws. For example, the OPC is working with the Department of Fish and Game and the Los Angeles Regional Water Quality Control Board to support overlapping goals of improving water quality and protecting fish, wildlife and other coastal resources.

Since the passage of the Clean Water Act in 1972, California has made great strides in reducing point source pollution from industrial and other operations.  Yet, there has been less progress in reducing pollutants from non-point sources, such as storm water flows from heavily paved urban environments, construction sites, and agricultural operations. Innovative approaches are needed to continue to clean up our waterways. To that end, the OPC has supported expanded use of low-impact development through a 2008 resolution and accompanying projects.

In California, 21 coastal power plants use once-through cooling, a process in which large volumes of seawater are drawn into the power plant to condense steam created during electricity generation. When this occurs, small organisms such as plankton and larvae are drawn into the cooling system and killed, and larger fish are pinned against the water intake screens.  Warm water is also discharged back into the ocean, which harms the resident sea life. The OPC has supported the work of the State Water Resources Control Board to eliminate once-through cooling in California since 2006 with the passage of the first OPC resolution.

Planning to enjoy a day at California’s coast can be ruined when a beach is closed from contaminated ocean water. Rapid indicators of pathogen contamination could provide for more timely notice of beach closures and openings. The OPC has targeted predicting harmful algal blooms (HABs) as one of the first improvements to water quality testing off the California coast.

The accumulation of land-based litter and ocean-based derelict fishing gear in the ocean has garnered much attention in the media. Scientific studies have found more than 260 marine species suffer from marine debris by ingestion, starvation, suffocation, infection, drowning, and entanglement. Risks from toxins and contaminants of emerging concern (CECs) associated with marine debris are a growing research area. The OPC began to address marine debris and toxins with a 2007 resolution that seeks to reduce ocean and coastal debris and its impacts to ocean ecosystems.

Ships are a vital part of the ocean economy from commercial transportation to recreational use. California’s myriad of ports and harbors host pleasure craft, cruise ships, and oil tankers, all of which can act as individual sources of pollution to the sea. The OPC seeks to reduce and eliminate pollution from vessels such as developing effective alternatives to anti-fouling hull paints.

Implementation of LID in California